Another interesting type of stamps where the stamps maybe 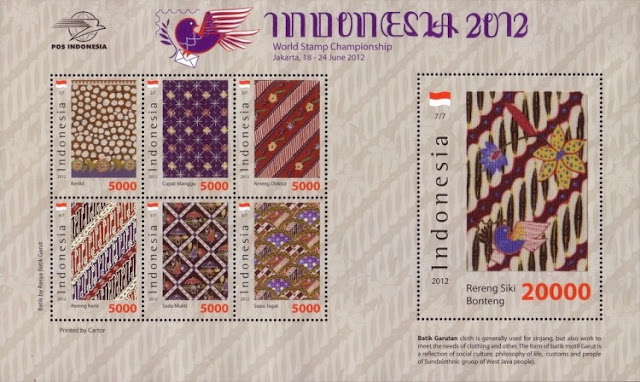 Indonesia Post issued a special Souvenir sheet on 18 June 2012 during the World Stamp Championship held at Jakarta from 18-24 June 2012 which features batik cloth prints on the stamps while the bigger stamp features a piece of the Batik Cloth.

The form of batik motifs is a reflection of social culture, philosophy of life, customs of people of Sunda, an ethnic group of West Java people. 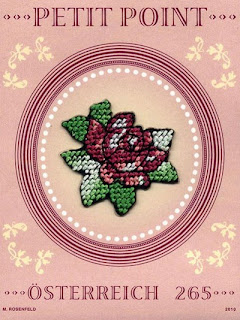 Austria Post has issued on 17 September 2010, a miniature sheet which has Petit Point embroidered flower “Rose” in the center of the paper sheet.

Petit Point got its name due to the fact that one can only recognize small dots (points) by looking at the embroidery. There is a substantial difference between 'Needlepoint' and 'Petit Point'.

The petit point stitch runs on diagonals and crosses over an intersection of one horizontal and one vertical thread making a slanted stitch at a 45-degree angle. The thread count or number of stitches to the inch is very small, whereby the name petit meaning small point. This stitch enables the sewer to create pictures and other objects to its minutest details.

Petit point is part of Viennese culture. Both the imperial and aristocratic classes have this habit of creating stitches as fine and valuable as that of petit point, used with the finest of threads. Austria, this time features another philatelic wealth, the incorporation of petit point on its postage stamps courtesy of Hammerle and Vogel, an embroidery company in Austria. 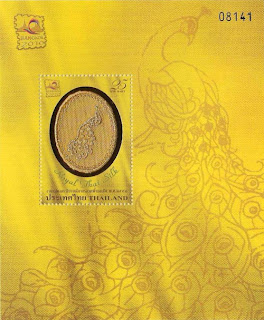 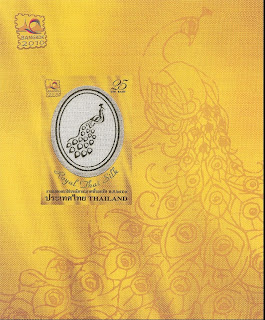 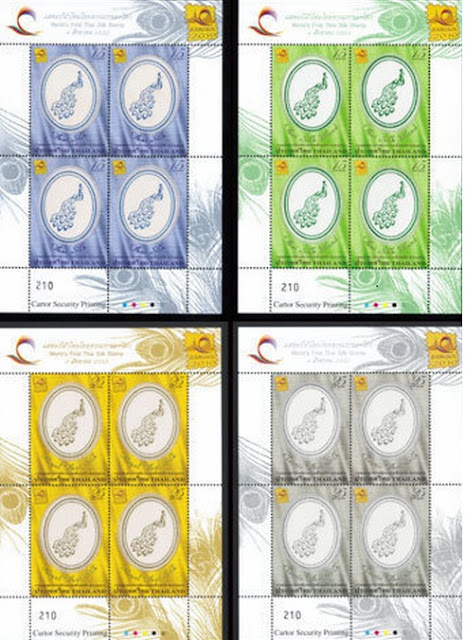 As a part of Asian International stamp Exhibition Thai post issued a set of four postage stamps featuring amazing Thai Silk on 04 August 2010. Thai silk has won the hearts of people worldwide for a long time and it has become one of the symbols of the country.

In order to honor Her Majesty Queen Sirikit and to promote and publicize Thai silk and silk product, Thailand Post has requested permission from Her Majesty the Queen to present the Royal Peacock brand, which certifies the high quality of Thai silk, on postage stamps and to use hand-woven silk as part of the stamps. The Royal Peacock brand will be presented in embossed foil in four colours–gold, silver, dark blue and green. A miniature sheet with peacock embossed on golden foil, on a white silk material is also added to the issue.

The Thai silk stamps had been created to celebrate the grand opening of "Bangkok 2010 Asian International Stamp Exhibition ". About 20,000 stamps had been produced, consuming nearly 5,500 metres of Thai silk. 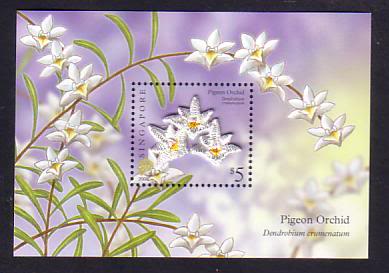 The Miniature Sheet issued by Singapore Post on 06 May 2009 shows a Pigeon Orchid embroidered in the center of the stamp. The printing process used in the sheet is Offset Lithography with Embroidery.

The Pigeon Orchid (Dendrobium Crumenatum)- is the member of the family Orchidaceae. This orchid produces white fragrant flowers with a yellow tinted throat. From the side, the orchid resembles a flying pigeon, and hence, it is also commonly known as The Pigeon Orchid. It is a widely cultivated ornamental and landscape plant in Singapore. 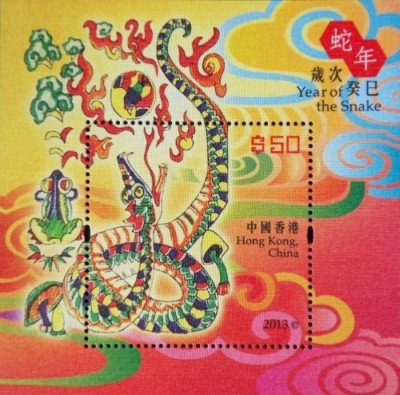 The use of animals to mark the 12 components of the Lunar New Year cycle is a long-held tradition in China. Frequently used as the theme for Chinese arts and crafts since ancient times, the 12 Chinese zodiac animals have profound significance in Chinese folk handicrafts. 2013 sees the arrival of the Year of the Snake. This issue is the second Lunar New Year special stamp issue in the fourth series released by Hong Kong Post. The special stamps use different types of traditional Chinese arts and crafts to signify the theme of the Year of the Snake. The silk stamp sheetlet issued by Hong Kong Post on 26 January 2013 has been produced with 100% genuine silk made in Italy. 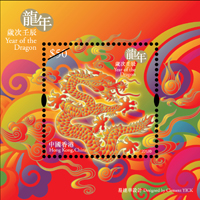 "Year of the Dragon" is the first special stamp issue of the fourth Lunar New Year Animal series. Almighty and commanding respect, the dragon is not only a totem for superior status, but also for the Chinese race. Featuring a silk stamp sheetlet filled with Chinese elements perfect for this auspicious season. The silk stamp sheetlet issued by Hong Kong Post on 14 January 2012 has been produced with 100% genuine silk made in Italy. 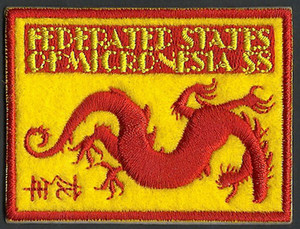 The Federated States of Micronesia issued an embroidered Dragon Stamp to commemorate the Chinese Lunar Dragon New Year of 2012. The stamp is self adhesive. 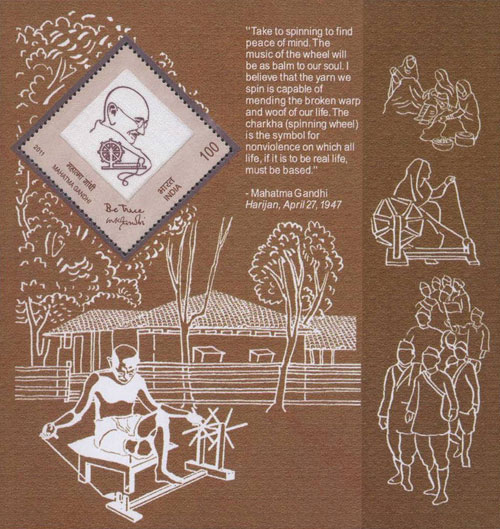 In 2011, India Post released a stamp printed on khadi (Indian handspun and hand-woven cloth). A first such stamp in the country, it bears the image of Mahatma Gandhi.

The stamp was issued on 12 February 2011, the inaugural day of week-long world philatelic exhibition - Indipex 2011. 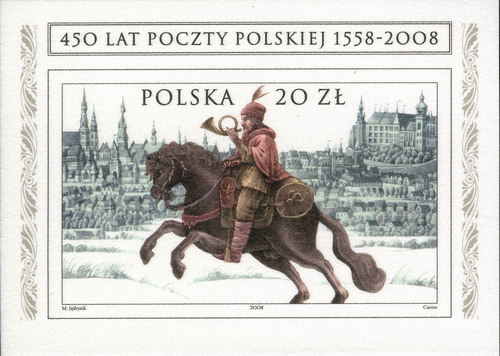 Stamp block printed on Silk issued by Polish Post on 19 December 2008 to commemorate 450 years of Polish Post 1558 – 2008. The Stamp presents a horse messenger on the background of a renaissance panorama of Krakow city (end 16 century).

It is the second issue (first issue 400 anniversary of polish post) featuring a reproduction of the painting ‘Na Kieleckim Szlaku’ (On Kielce Route) by Apoloniusz Kedzierski and this painting is found in the Museum of Postage and Telecommunications. 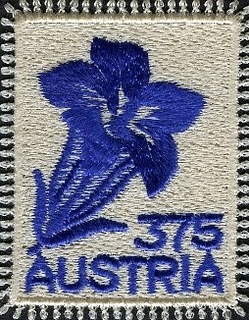 Austria Post issued the second Austrian cloth stamp on 19 September 2008 made of threads, embroidered into the design of the Clusius Gentian, another alpine flower.The Gentian stamp, like the first embroidered commemorative “Edelweiss”, is a product of the Austrian embroiderers Hammerle & Vogel. The commemorative stamp will be sent around the world, telling the stories of embroidery and Alpine plants, The thread and the colour follow the natural shape of the Clusius Gentian (Gentiana Clusii), discovered around 100 BC by King Gentius of Illyria. The embroidery edge mimics stamp perforation. 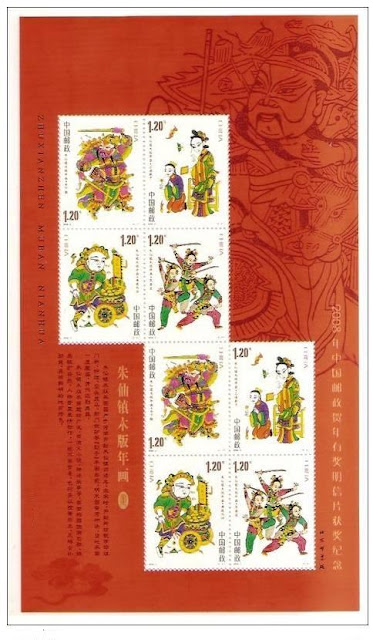 China Post issued a minisheet on 15 January 2008 made of artificial silk featuring the New Year woodprint images of Zhuxian Town
1.Gate Guardian General (Chinese Door God) Standing with Cane.
2.Give Her Son a Lecture(There is a book on the mother´s hand).
3.Come Back With Fruitful Result.
4.Chivalrous Women.

Zhuxianzhen New Year Woodprints get its name as it is mainly produced in Zhuxian Town, 23 kilometers from Kaifeng, capital city of central China's Henan Province. The place began to produce New Year pictures in the Northern Song Dynasty (960-1127), and prospered in the Ming (1368-1644) and Qing (1644-1911) dynasties. There were more than 300 workshops in Zhuxian Town at its peak. At the end of the Qing Dynasty, the production of woodprints began to decline in Zhuxian Town, but the workshops moved to the city of Kaifeng, where the business of woodprints revived, with a number of famous workshops being established.

After the liberation in 1949, some authoritative institutions were established in Kaifeng, dedicated to protect and collect this traditional woodprint craft.The themes of Zhuxianzhen woodprints mainly vary from portraits of martial and intellectual gods to portraits of spirits. The themes are classified into three categories; exorcising ghosts and conferring blessings; propitious gods and customs; theatrical and historical legends.The pictures printed in Zhuxian are very popular due to their bright colors, exaggerated images, rough lines and full compositions.

Every year on the ninth day of the ninth lunar month, Zhuxian holds a New Year Picture fair to commemorate its anniversary. It is also the day to start the printing of its New Year pictures. 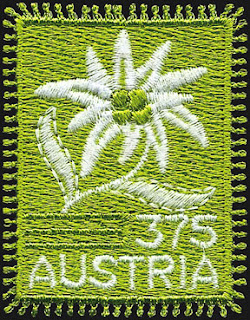 Austria Post issued a cloth stamp on 19 July 2005 made of threads, embroidered into the design of the Edelweiss, the well-known alpine flower. The embroidery edge mimics stamp perforation. First embroidered stamp from Austria.The stamp was issued in honor of the Austrian embroidery industry, which dates back to the eighteenth century. The stamp has a self-adhesive backing, but can even be worn if so desired. Stamp made in Lustenau, the metropolis of the Vorarlberg embroidery industry.

The world's first 'Embroidery' stamp is issued on 7 February 2001, to commemorate the event of the "Swiss National Philatelic Exhibition, NABA-2000" was issued by Helvetia (Swiss) Post. It has a giant size of 59 x 48 mm with a denomination of 5.00 Euro, which was the 2001 rate for a domestic registered letter. The embroidery stamp was designed by Mr. Peter Hostettler of Bischoff Textile AG of St. Gallen, Switzerland. For the embroidery work a glossy Satin Polyester fabric has been used and the actual  embroidery work on this material is in two shades of Blue color. 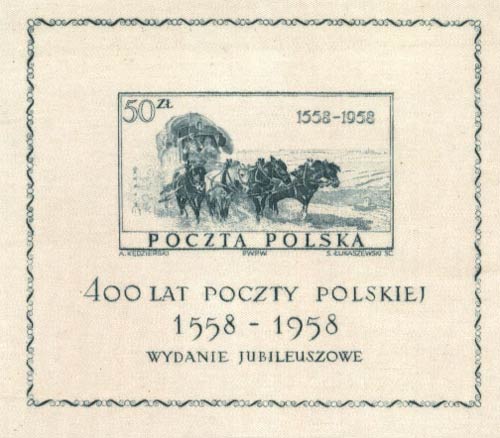 The first Polish Silk was issued on account of the 400th jubilee of the Polish Post on 12 December 1958 - a non-serrated anniversary issue in a stamp block, denominated at PLN 50, featuring a reproduction of the painting "Na kieleckim szlaku" (English -  On the Kielce Route) by Apoloniusz Kędzierski, composed with deep blue lines on a light purple background. The original painting, missing during the years of World War II, belongs to the Museum of the Post and Telecommunications. 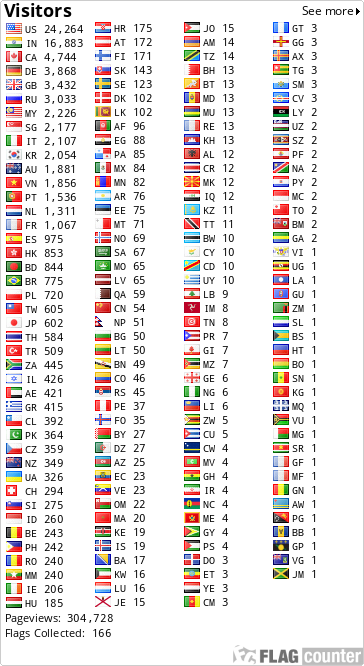