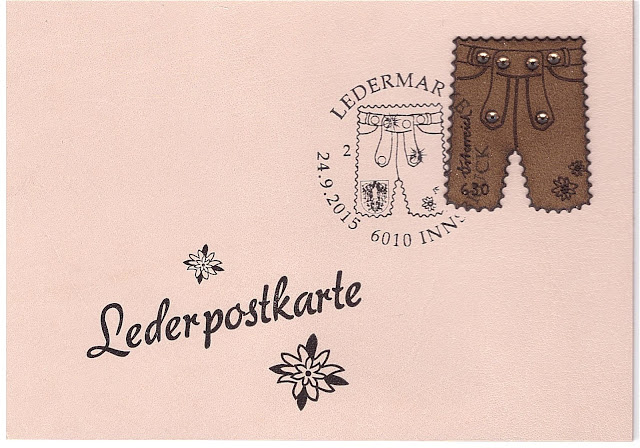 Swiss Post had issued a special stamp made of leather (see earlier post) and a private collector had specifically made a limited edition of Leather Postcards with the Leather Stamp stuck on it and cancelled on the first day of issue. 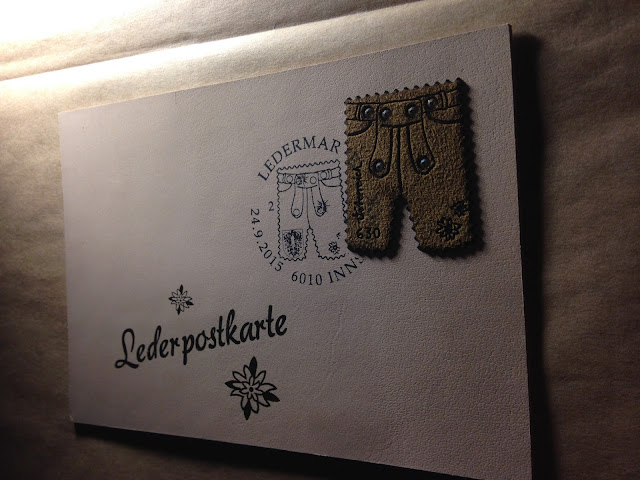 
Disclaimer - Information about the philatelic issue on this page has been taken from the net and are for informational purposes only. No copyright claim is made for the above mentioned information/pictures.
Posted by kcsquare at 12:25 No comments:

Glow in the Dark Stamp Under UV Stamps - Update 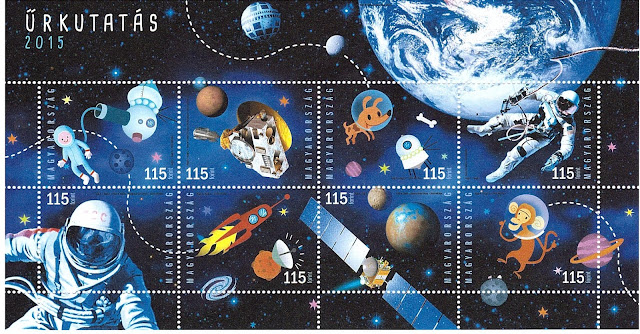 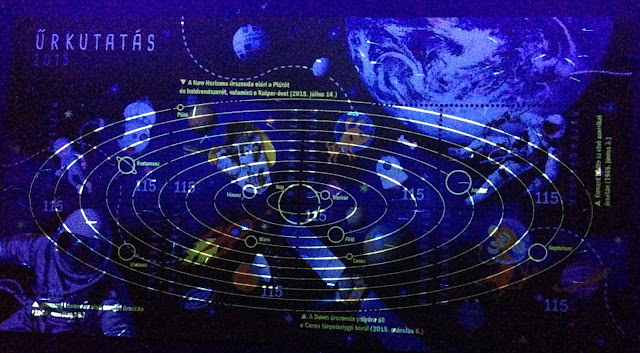 Magyar Posta is issuing a commemorative miniature sheet to record current space research anniversaries and events on postage stamps. The miniature sheet is intended to appeal to young people and thus its graphic design mixes reality and fiction, and photographic and child-like drawings. The miniature sheet, which contains eight stamps each with a face value of HUF 115.

The photo-based designs mark the 50th anniversaries of the spacewalks by Alexey Leonov and Edward White. On 18 March 1965 Alexey Leonov became the first person to step into space. He spent 12 minutes outside the spacecraft Voskhod 2. On 3 June the same year, the Gemini 4 astronaut Edward White spent 36 minutes in space outside his capsule. The stamps showing the two topical events depict the space probes New Horizons and Dawn. The former was launched on 19 January 2006 as the first mission in the New Frontiers program. During its flight it approached Jupiter, and reached Pluto on 14 July 2015. After this, the probe will visit one or more objects in the Kuiper Belt. Dawn is the ninth probe in the Discovery program, which will explore Ceres as part of its mission and went into orbit round the dwarf planet on 6 March 2015.

A special feature of the miniature sheet is that under UV light text describing the space research anniversaries and events becomes visible as do the planets of the Solar System and the stylised orbits of the subjects of the topical events, the dwarf planet Ceres and Pluto.

Disclaimer - Information about the stamp issues on this page has been taken from the net and are for informational purposes only. No copyright claim is made for the above mentioned information/pictures.
Posted by kcsquare at 17:15 No comments:

Email ThisBlogThis!Share to TwitterShare to FacebookShare to Pinterest
Labels: Glow in the Dark Stamp Under UV Stamps, Z Hungary 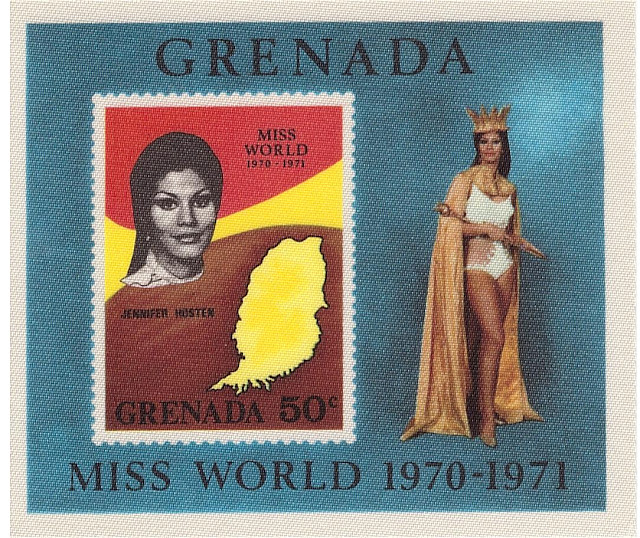 Grenada Post issued a Silk Miniature Sheet featuring Ms.Jennifer Hosten winner of the Miss World Title in 1970. The miniature sheet also feature the Map of Grenada on the Stamp.

Jennifer Hosten of Grenada, Miss World 1970, was the first black to be crowned as Miss World and the first ever at any major international pageant.

Posted by kcsquare at 02:18 No comments: 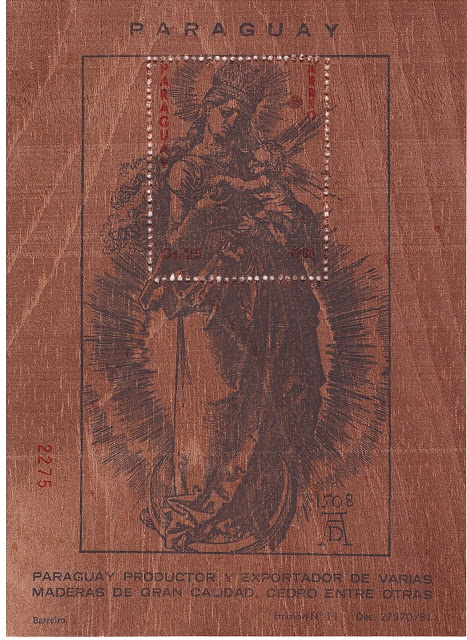 Albrecht Durer (1471-1528) one of the most famous artist of Reformist Germany, widely known for his paintings, drawings, prints, and theoretical writings on art.

Posted by kcsquare at 22:34 No comments: 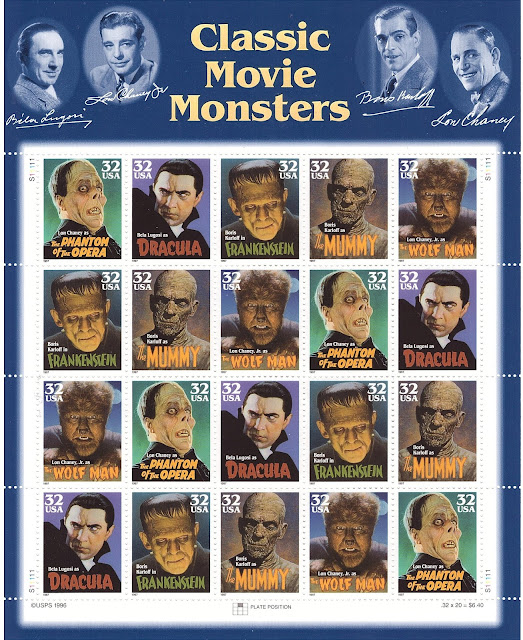 USPS had issued a set of 5 Stamps commemorating the Classic Movie monsters with a set of hidden images featured on the stamps which can be only viewed using a special Decoder lens issued by the US Postal service in an earlier issue.

Phantom of the Opera
In 1925, American movie-going audiences experienced one of the most horrifying silent films ever created, The Phantom of the Opera. This story of a demented, disfigured organist, who lives in the maze-like tunnels and cellars under the Paris Opera House, was based on a novel by Gaston Leroux.

Wearing a mask, the Phantom wreaks havoc on the opera, strangling a stagehand who has seen him, and sending the theater’s giant chandelier crashing into the audience during a performance. Later he kidnaps a young singer, Christine, with whom he is enamored, and takes her into his subterranean “home.” Before she is rescued, Christine pulls off the Phantom’s mask to reveal a hideous, skull-like face. The Phantom meets his end at the hands of an angry mob, which beats him to death and throws his body in the river Seine.

The man responsible for bringing the Phantom to life was silent actor Lon Chaney. Born to deaf-mute parents, Chaney was a master of pantomime. As the Phantom he gave his greatest performance, eliciting feelings of both terror and pity. Chaney also starred in The Hunchback of Notre Dame (1923), London After Midnight (1927), Tell It to the Marines (1927), While the City Sleeps (1928), and Thunder (1929).

Dracula
In 1931 the movie Dracula, based on the novel of the same name by Bram Stoker, shocked audiences with its tale of Transylvania’s Count Dracula. An undead corpse known as a vampire, Dracula has an insatiable thirst for human blood. To feed his craving, Dracula seeks innocent victims at night, and then drinks their blood. Since sunlight is deadly for vampires, during the day he must take shelter in a coffin.

The man responsible for bringing the ghoulish, yet elegant Count Dracula to life was Bela Lugosi. Well-suited for the part, the Hungarian-born Lugosi was a classically trained actor with a heavy accent. He had also starred in the 1927 Broadway production of Dracula.

Frankenstein
In 1931 the movie Frankenstein made its shocking debut as the first major horror movie with sound. Based on Mary Shelley’s classic novel Frankenstein; or, The Modern Prometheus, published in 1818, it is the story of Dr. Frankenstein, a scientist who creates a living being from the bodies of the dead. Despite his noble intentions, Frankenstein creates a monster.

Assembled from body parts stolen from graveyards, the monster is brought to life when Frankenstein raises him through a hole in the roof of his laboratory and he is struck by lightning. When the creature is lowered to the floor and begins to move, Dr. Frankenstein cries, “It’s alive!”

Despite his hulking size and revolting appearance, the monster is actually a gentle creature. Although he is responsible for drowning a little girl, the tragedy is due only to his childlike ignorance of the world.

Boris Karloff was the talented actor who brought the monster to life. With a delicacy of expression unexpected from a character so grotesque, his performance inspires feelings of pity and compassion. When the monster meets his end in a burning windmill, the mood is tragic. The role brought Karloff worldwide fame, and launched his 20-year career as the king of horror films.

The Mummy
Released in 1932, The Mummy is the story of a mummified ancient Egyptian high priest – Im-Ho-Tep. Im-Ho-Tep is awakened from centuries of sleep when, despite urgent warnings, the inscription on a scroll found with his body is intoned.

In what has been described as “one of the screen’s most chilling scenes,” Im-Ho-Tep takes the form of a sinister Egyptian, Ardath Bey, and battles British forces for possession of his princess, Anck-es-en-Amon, who has been reincarnated as a beautiful modern-day woman. Once reunited with the princess, Im-Ho-Tep shows her their past lives in the reflection of a pool of water. After wreaking considerable havoc, Im-Ho-Tep is eventually returned to his mummified state.

The Mummy’s eerie presence was brought to life by the unique talents of Boris Karloff.  He began his career on the stage, starred on Broadway in Arsenic and Old Lace (1941), and as Captain Hook in Peter Pan (1950). This versatile actor also made frequent radio and television appearances.

The Wolf Man
In 1941 The Wolf Man frightened audiences with its tale of Larry Talbot, a man who returns to his homeland in Wales and is attacked by a wolf-like creature (played by Bela Lugosi). Talbot survives the attack only to discover that the creature’s bite has turned him into a “lycanthrope” – a man who is involuntarily transformed into a werewolf when the moon is full.

The werewolf is a violent creature who roams the countryside at night attacking human prey. Doomed to a life of misery and mayhem, Talbot is tortured by his dual existence. The werewolf’s rampage is finally put to an end when Talbot’s father slays the creature with his silver-tipped cane. Talbot then peacefully assumes human form.


Lon Chaney, Jr. is the talented actor who so convincingly became the Wolf Man. In fact, the highlight of this film was his on-screen transformation into the werewolf. Requiring many hours of make-up work, this chilling metamorphosis thrilled audiences. 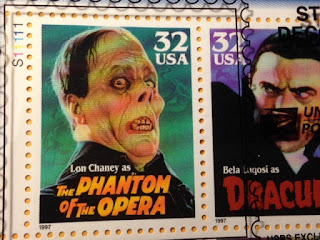 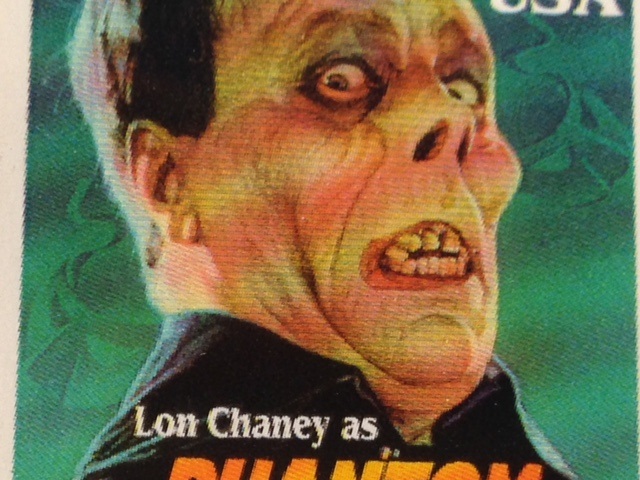 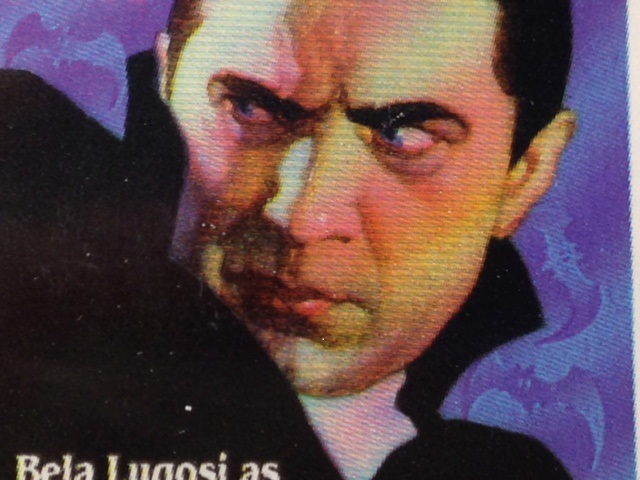 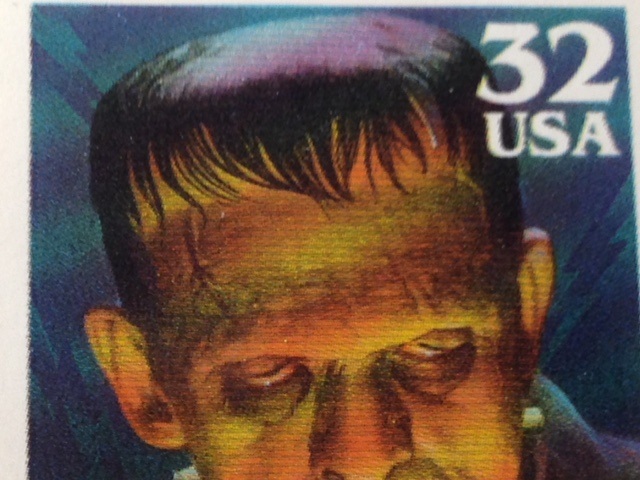 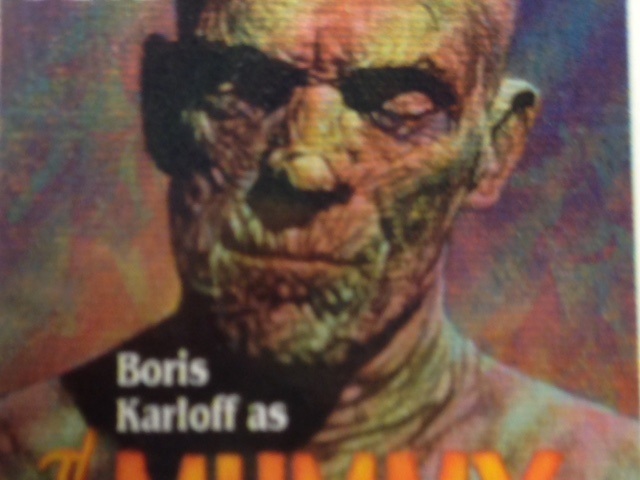 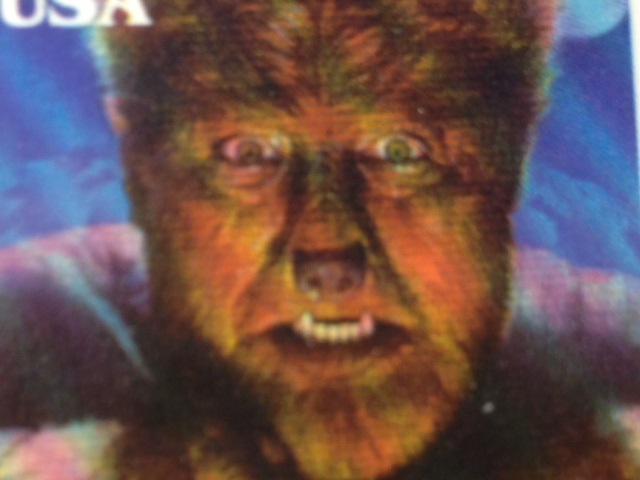 
Disclaimer - Information about the stamp issues on this page has been taken from the net and are for informational purposes only. No copyright claim is made for the above mentioned information/pictures.
Posted by kcsquare at 11:44 1 comment:

Australia 2009 Parks and Gardens FDC with seeds embedded on a gift card. 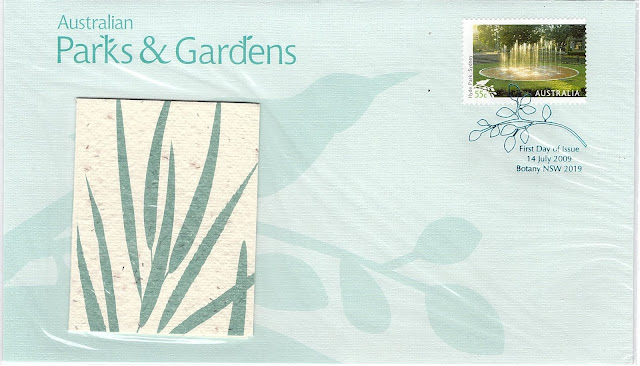 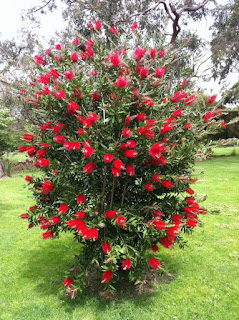 The Callistemon species can grow upto 3 metres and prefers a light to medium soil in a moist sunny position. It blooms in late spring with a red spiky flowers. 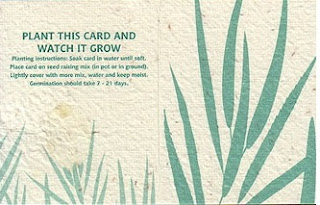 
Disclaimer - Information about the philatelic issue on this page has been taken from the net and are for informational purposes only. No copyright claim is made for the above mentioned information/pictures.
Posted by kcsquare at 08:35 No comments: