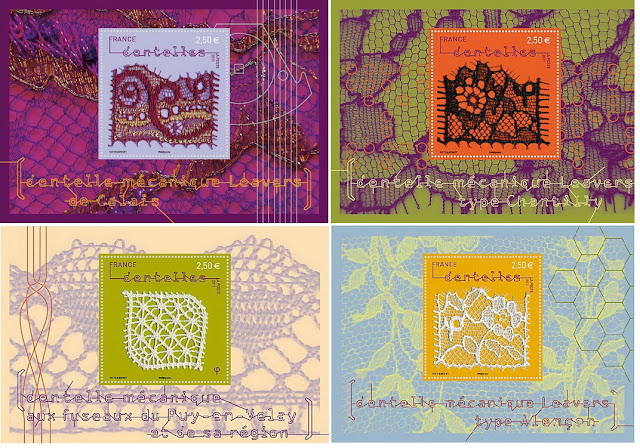 Four interesting stamps has been released in France on 10 October 2009 honoring machine-made lace. Hot glue is applied to a large piece of lace to stiffen it.  The lace is then cut into sections by hand, and fixed to the stamp.

The symbol Φ is included in the design of three of the stamps – you are supposed to find it. It is in the lace itself, and is not the Le Puy one.

Each block contains a stamp which is affixed a piece of real lace industry of a different type. Lace is hot-glued in a process for depositing the adhesive only on the lace, which heated, making the complex lace / very strong paper. The cutting is then done by hand using a pastry cutter or scissors. This complex lace / paper are then pasted on the stamp. Small feature: the sign phi is drawn in the lace of 3 stamps (Chantilly, Alencon and Calais).

Chantilly lace evokes haute couture with its transparent side, sensual, ethereal. Inspired often floral, black is the color of choice. The round holes superimposed on the block refer to the boxes that guide drilled weaving lace.

Alencon lace identified by the embossed designs is recognized by needle technique, punctuated by delicate floral motifs and elaborately pierced. The white highlights its subtlety and freshness. The bottom block contains an air mesh honeycomb so typical of this lace. In 2010, Alencon lace has been included in intangible cultural heritage by UNESCO.

In this type of lace, geometric patterns are preferred, as here on the stamp which contains this delicate diamond partitioned. In general, the off-white but also black, are dominant in natural materials such as linen or cotton for the Puy lace. The time for producing mechanical fashion and decor strips of lace refined. The block diagram on the left recalls the basic principle of crossing time is respected in the mechanical process.

Rearranging my blog to reflect the proper category

Posted by kcsquare at 06:06 No comments: 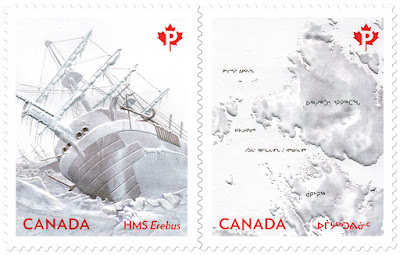 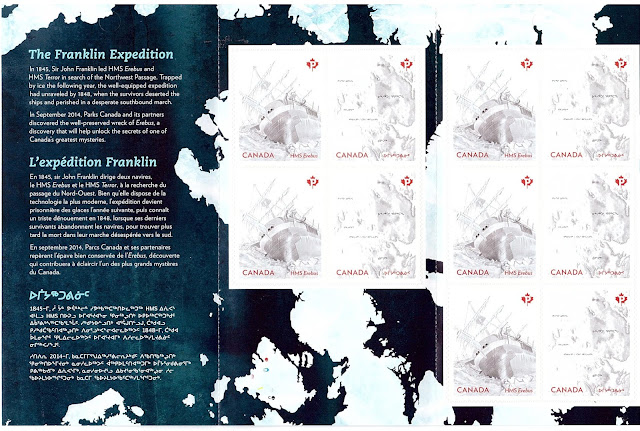 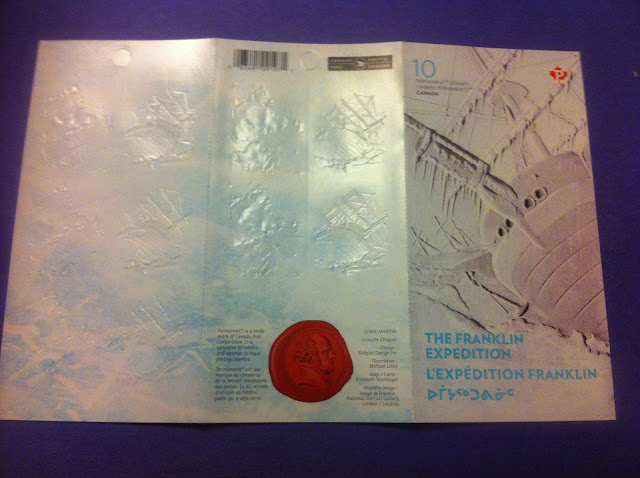 Embossed Effect seen at the back of booklet

Canada Post issued stamps which pays tribute to the discovery of HMS Erebus, the lost flagship of the Franklin Expedition.

Erebus was one of two ships that became trapped in ice during an ill-fated 1840’s voyage in search of the Northwest Passage. Their crew eventually died in a desperate southbound march. Erebus remained lost until 2014, more than a century and half later, when Parks Canada and its partners located the ship off the Nunavut coast.

This booklet contains five pairs of se-tenant domestic stamps. One stamp depicts a stricken Erebus encased in ice, while the second is a map of the Arctic region where the expedition met its grisly fate. Locations on the map are written in Inuktut, a tribute to the stories of Inuit eyewitnesses, passed down through oral accounts that helped pinpoint the eventual discovery.

The stamps on this booklet have an embossed effect.

Posted by kcsquare at 10:23 No comments:

Croatia 2014 Minerals and Rocks Round Shaped Stamps with Embossing 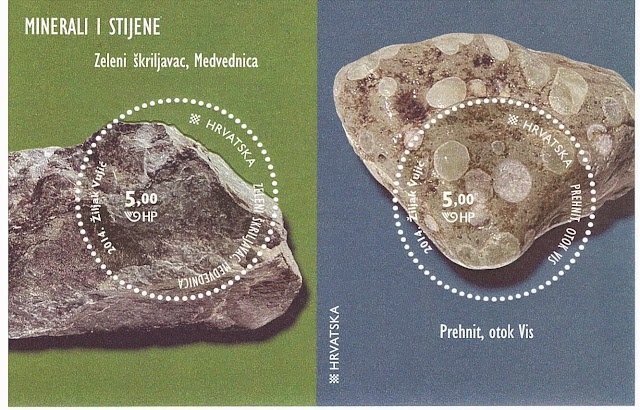 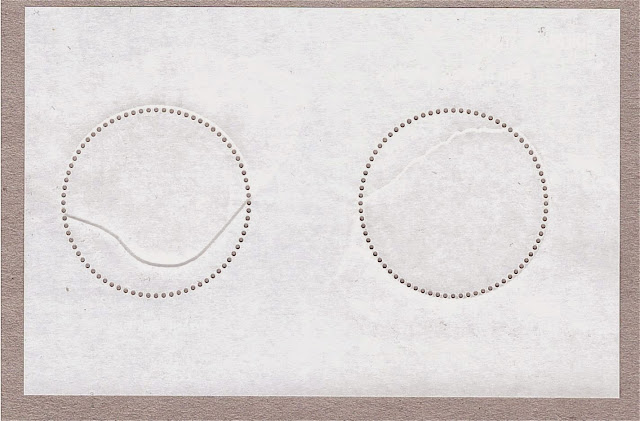 Rocks are aggregates of one or more kinds of minerals, while minerals are natural parts whose composition can be expressed by chemical formula.  Minerals are characterised by regular inner structure and regular position of atoms, which is reflected also on the outer form of a mineral (such regular forms of minerals are called crystals).

Round Stamps issued by Croatian Post depict the Rocks found in different parts of Croatia and the stamps have an embossed glossy lacquer printing process.

Disclaimer - Information about the stamp issues on this page has been taken from the net and are for informational purposes only. No copyright claim is made for the above mentioned information/pictures.
Posted by kcsquare at 05:47 No comments: 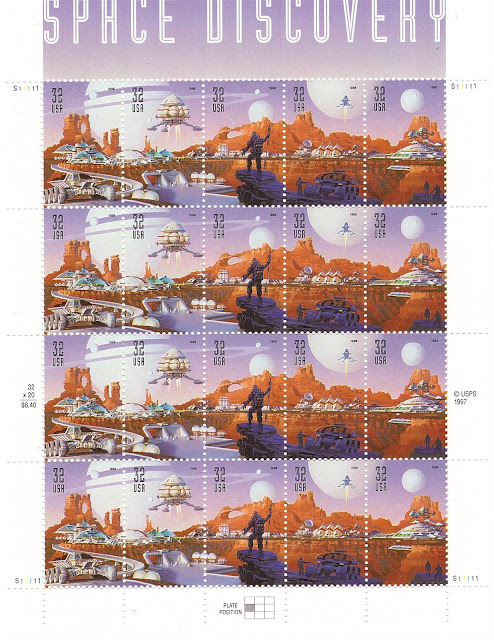 The U.S. Postal Service issued of a pane of stamps called "Space Discovery" to commemorate Space Exploration. The five 32c -stamp issue pictures the artist's conception of what it would be like to live on another planet, complete with space vehicles, a futuristic space city, and space explorers.

Also the stamps include a hidden image which can be viewed by a Special Stamp Decoder issued by USPS (featured in an earlier post on this blog). 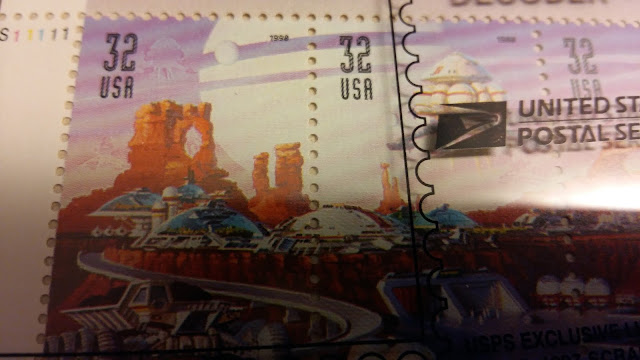 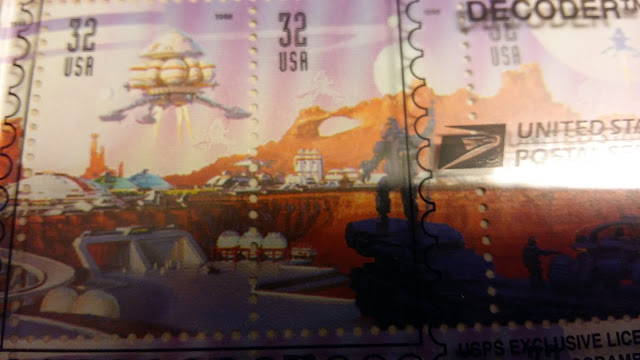 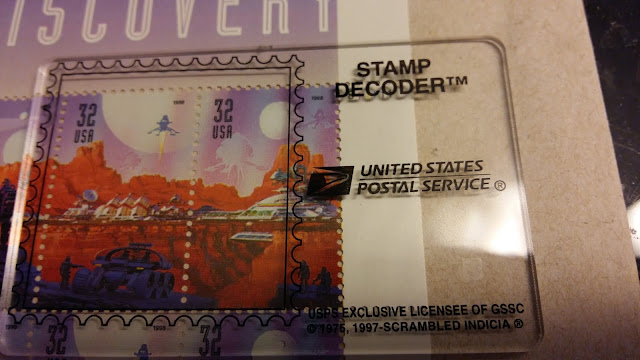 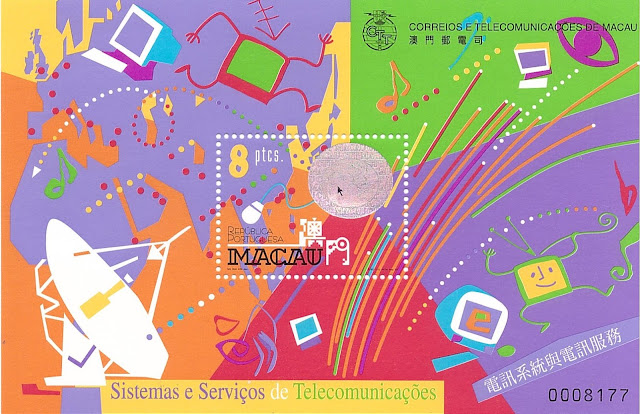 Macau Post issued a souvenir sheet commemorating the Telecommunication Services and Systems with a special stamp featuring a hologram.

Posted by kcsquare at 02:12 No comments: 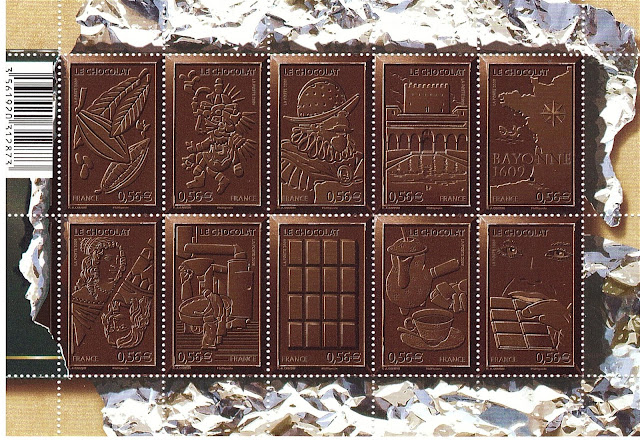 La Poste France has issued a miniature sheet commemorating 400 years of Chocolate's arrival in Europe in 1609, La Poste has created a block of chocolate-scented stamps.

The block of 10 stamps (€0.56 each, for €5.60) is designed to look like a bar of chocolate and even smells like one. The stamps depict scenes from the history and manufacture of chocolate.

The ink used on the stamps contains microcapsules which provide a chocolate scent that will reportedly last up to two years.

Posted by kcsquare at 02:02 No comments: 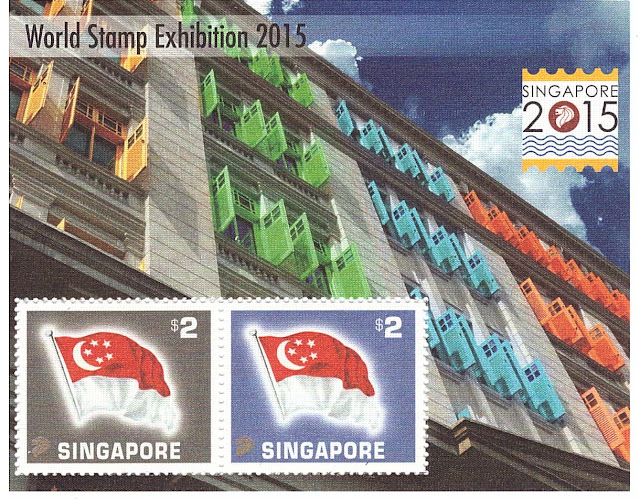 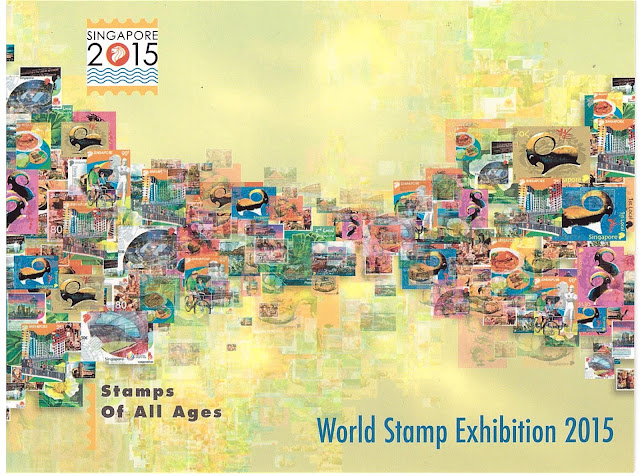 The colour red in the upper section of the Singapore Flag epitomizes universal brotherhood and the equality of man, while the colour white in the lower section embodies pervading and everlasting purity and virtue.

The crescent moon in the upper left red section of the flag represents a rising young country. The five stars arranged in a circle beside the crescent moon stand for democracy, peace, progress, justice and equality.

Posted by kcsquare at 06:50 No comments:

Stamps with Scratch Off Printing - Update 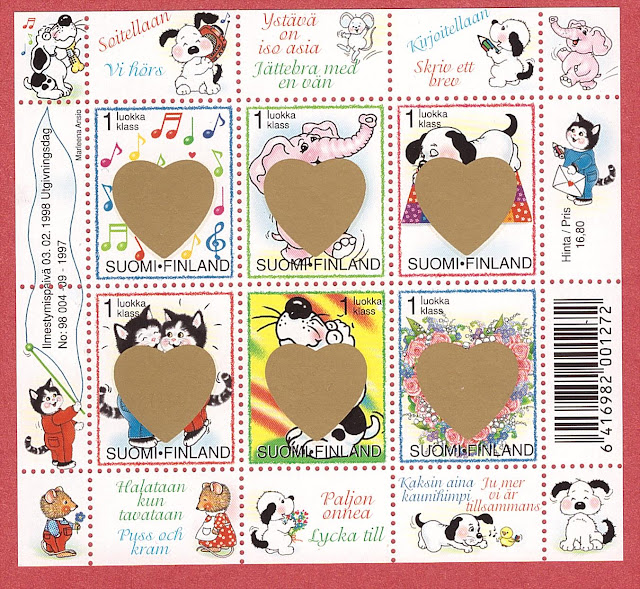 On the occasion of Valentine's Day, Finland Post has issued a miniature sheet featuring the greetings and gifts given during valentine's day with a scratch-off heart. When the heart is scratched off, one of six different images appears. Each stamp has a heart-shaped scraping surface hiding a lovely picture of friendship

The images hidden by the overlaid heart are musical notes with two dogs, an elephant with a mouse and flowers, a puppy with a sealed envelope, kittens hugging, a dog with flowers and rodents with flowers.

The stamp's animal motifs - cats, dogs, mice and elephants -
are depicted on the margins of the miniature sheet as well. The
margins also provide friendship greetings in Finnish and Swedish.

Disclaimer - Information about the stamp issues on this page has been taken from the net and are for informational purposes only. No copyright claim is made for the above mentioned information/pictures.
Posted by kcsquare at 04:56 No comments:

Email ThisBlogThis!Share to TwitterShare to FacebookShare to Pinterest
Labels: Stamps with Scratch Off Printing, Z Finland 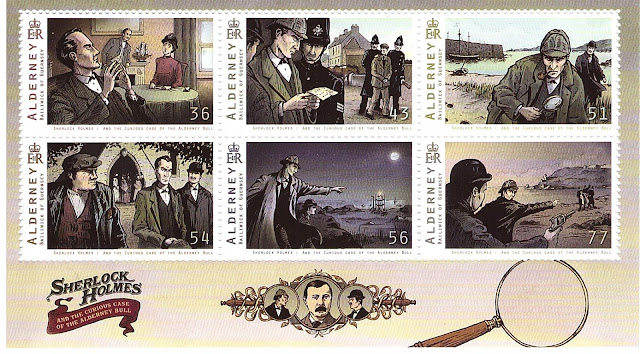 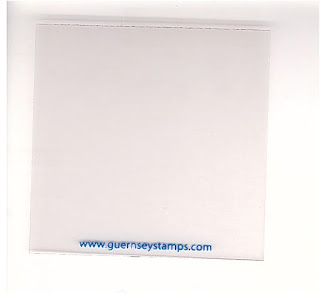 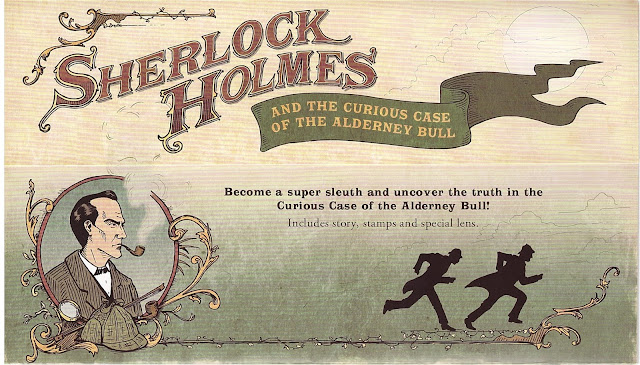 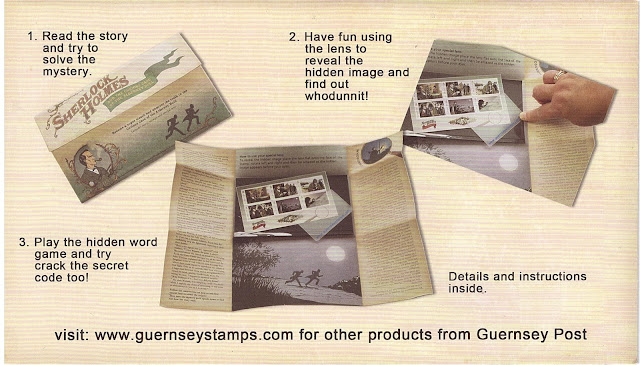 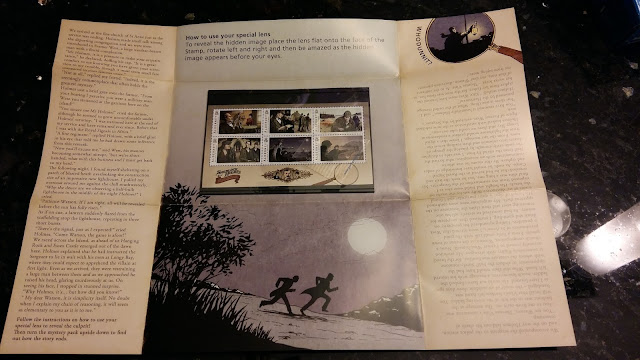 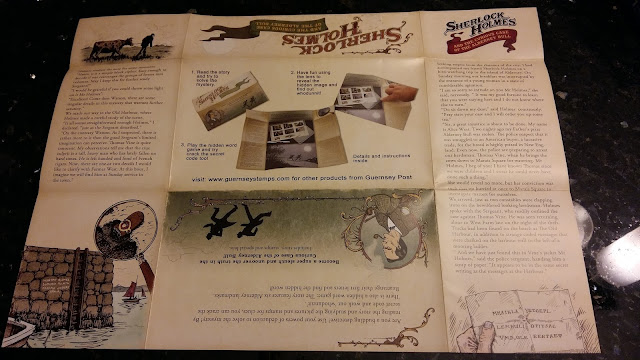 
Sherlock Holmes was one of the famous creations by Sir Arthur Conan Doyle, born on 22 May 1859.

'The Adventures of Sherlock Holmes,' were published in 1892 featuring short stories of crime detective and became quite popular very quickly.

The pack also includes a set of 6 stamps which tells the story and by scouring the pictures and stamps for clues (hidden images), one can set about solving the mystery. The Stamps were issued by Alderney Post in commemoration of the 150th Anniversary of Sir Arthur Conan Doyle’s birth.

The story starts with the theft of an Alderney bull, a breed of livestock much valued in the 19th century for the quantity and richness of milk produced by the cows.

The drawings incorporate buildings and landscapes from Alderney, an island within the Guernsey boundaries.

Guernsey is a group of islands in the English Channel, dependent of the British Crown.


Part of the Guernsey bailiwick and situated at the northernmost of the Channel Islands, is the Alderney Island, who started issuing their own postage stamps in 1983.

The hidden image (Spoiler alert) - The culprit can be seen with the decoder lens (when tilted to the left at 15 degrees) in the area of the magnifying glass on the miniature sheet. 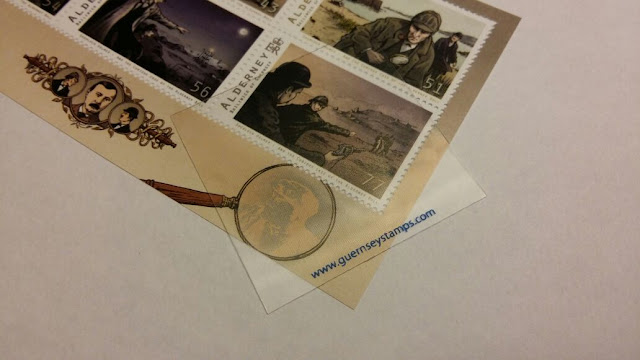 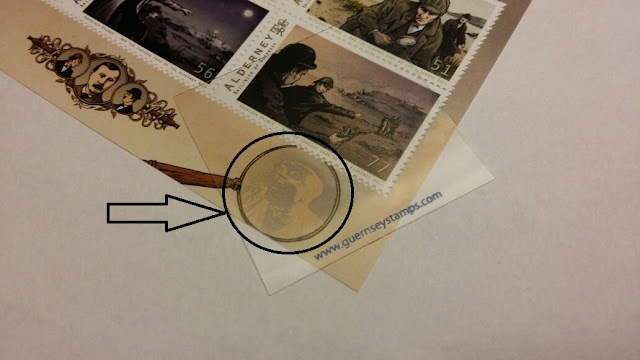 
Disclaimer - Information about the stamp issues on this page has been taken from the net and are for informational purposes only. No copyright claim is made for the above mentioned information/pictures.
Posted by kcsquare at 04:59 No comments: